Another enjoyable night at the club………

Table 1: After Action Report by Alistair

This week the Pike and Shotte table dabbled with the early Renaissance period in a very loose recreation of the early fighting on the Flodden battlefield of 1513. In reality the play was another rules run through, introducing LARGE UNITS. MEDIUM as well as LIGHT ARTILLERY and SKIRMISHERS. 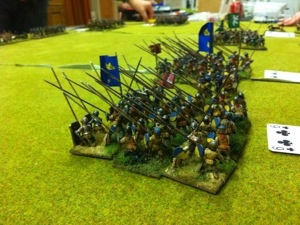 The Scots tried to emulate the echelon attack theory, but their command was not equal to the task on this occasion. The highlanders charged in admirable fashion but having blown a gasket getting there, were frustrated by the evading tactics of the arquebusiers. In the centre the Huntly’s attack stalled, while on the right, Home’s pike block was devestated by Howard’s bowmen. Meanwhile, the English cavalry were not idle and carried out a two-pronged attack on the artillery. Although the artillery could be powerful in defence, it was isolated and failed to stop a swarm of Border horse. Its destruction also signalled the flight of Home’s pike, ending the game with an English victory. 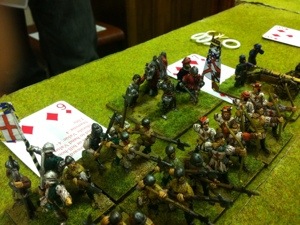 TACTICAL LESSON:
How do you beat an echelon attack?
Play the same track backwards.

Table 2: After Action Report by Ross

This week saw Roger begin his campaign on the high seas with his motley crew.

We decided to run the “capture the Governors daughter” scenario as a starter for 10. Roger picked his crew and set about his dastardly attack on the Governors mansion. After making good headway and killing off some of the outlying guards he became unstuck by his inability to hit the side of a barn from 10 paces. This coupled with a rather unbelievably staunch defence by the sergeant of the guard saw the captain and the remainder of his crew scurrying back to his pirate hideout. 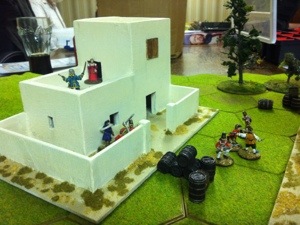 Although he didn’t quite manage to carry off the Governors daughter he did manage to make a few doubloons and save the majority of his crew in the post game “what happened to my crew rolls”. His band of treacherous thieves will sail the seas again! 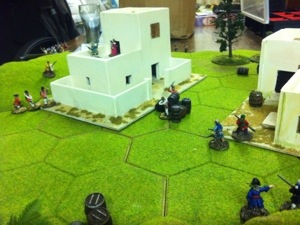 Hope to see you all soon.