Action on the way to Canneloni

words and pictures by Stuart

Last night we took the opportunity to kick off a new set of linked game  set around a narrative theme of the invasion of Campari (a sort of proxy for Savoy) by the armies of Naples, using Parma as their staging point and with the inability or unwillingness of the other Italian stages to get involved due to bankruptcy or tacit approval if not actual support.

Real details will be thin on the ground as this is just a narrative for the games to sit in. It gives us an excuse to fight battles on the tabletop and that’s all that matters for now.

The scenario was picked from One Hour Wargames by Neil Thomas, which as an excellent set of maps and army selector charts perfect for the size of game that fits our Tuesday evening slot and the rules which we have developed. This scenario involved the defence of a road which passed through a choke point between a wood and small lake. Defending this position was a small force from the Duke of Campari’s forces comprising two regiments of foot, a unit of skimishers and an artillery piece. Advancing up the road towards them were 3 regiments of Neapolitan foot, a unit of skirmishes and two regiments of horse, courtesy of the random army generator! The horse were useless for the battle but made perfect sense for an advance guard.

On the left the battle got underway with the two units of skirmishes opening up a lively fire, while one of the cavalry regiments stood off to observe. In the center of the table two Neapolitan regiments advanced to try and batter their way through. On the right the third regiment tried to creep round the edge of the lake and outflank the position. 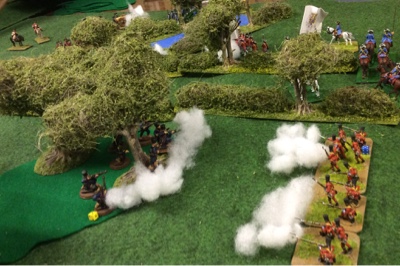 The fire fight in the middle of the table was particularly ferocious and the Swiss took heavy casualties until the white coated regiment Italiano was able to draw level and add it’s musketry.

On the right the La Reina regiment made it round the lake and deployed under canister fire then charged and took the gun. However this left it exposed to a flank attack from a Campari regiment and it gave way and flat back the way it came.

However their mounted namesakes had drawn up behind the lake and prevented any exploitation of the gap. By now the Campari center was had collapsed and the remaining Swiss and Italians advanced, the latter taking some shots from the skimishers on their flank.

Campari’s men right had no option but to retire, abandoning their gun. The cavalry negotiated the path round the lake but the narrow terrain delayed them and allowed the infantry to escape and fight another day. A strategic victory for Naples, but at heavy cost.