Prussian Tactics prove too much for the Archbishop’s forces!

The army of Hoegaarden was defeated by the forces of Feldschlosschen in a pitched battle at the village of Chimay in Staropramen, just to the north of Hopgarten. General Julius van Leffe, commanding the Hoegaarden army had camped around the village and drew his forces up on the open ground to the east. The village itself was garrisoned by a regiment of infantry and the cavalry and grenadiers deployed in the fields to the west. 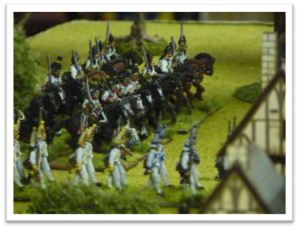 Feldschlossen came off the line of march and split into two main columns. Their weight was concentrated against Hoeggarden’s left, on the western side of the village, with 3 infantry and 2 cavalry regiments. Another unit advanced down the road leaving but a single regiment and their artillery on the east side, Hoegaarden’s right.

The battle opened quickly with artillery fire causing early casualties on the infantry. Van Leffe, seeing the threat to the west, ordered the Yellow regiment to countermarch across the rear of the army to support that side. The Rose and Blue regiments advanced and, with support from the artillery began to close on Feldschlosschen’s sole regiment on that part of the field. 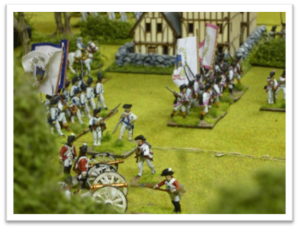 To the west however it was clear that there would be trouble. The Grenadiers closed up against the town and as the enemy approached were able to cause some damage. The Horse grenadiers charged, hitting and driving off Feldschlosschen’s dragoons but were counter attached in turn by the enemy cuirassiers. A swirling melee developed and the Hoegaarden dragoons were drawn in, but the cavalry of Feldschlossen prevailed and the remains of Hoegaarden’s cavalry were sent reeling back.

The grenadiers, hoping for support from the Yellow regiment, were taking heavy casualties as volley after volley crashed into them. The defenders of Chimay began to fire into the flank of the Feldsclosschen regiment which had advanced down the road, but was now lining the hedgerow to fire at the enemy moving up on the eastern side of the battlefield. 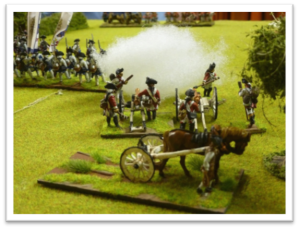 Here at least Hoegaarden were successful as the Feldschlosschen infantry withered away under cannon fire. A vain attempt to save them by having them march to the rear only served to expose their backs and with all cohesion gone, the regiment melted and ceased to exist. However the same effect was being produced on the Rose regiment, forcing it to halt and allow the Blues to advance, drums beating. There was a chance now that this side of the field could be swept clear and a turn executed to bring the regiments on to the flank of Feldschlosschen’s positon. Van Leffe urged his men on, ordered the guns to limber up to move to a new position and sent his staff officers to find out what the Yellow regiment were doing. At that point a volley of cannon balls hit the Blue regiment and it halted in its tracks, a second volley followed and the sight of red coats through the hedge to their flank caused the unit to waver and men began to leave the ranks. The chance had gone, the attack had failed!

Van Leffe’s staff officers returned to inform him the Yellow regiment had been delayed by the terrain in cutting across the road and was now deploying on the western side of the field, but their Colonel reported the cavalry defeated and the Grenadiers reduced to a few battered men. Taking stock of the situation, Van Leffe swore and threw his hat to the ground. It was time to retreat and save the remainder of the army.