On Tuesday some of the members staged a refight of the “Battle of the River Plate” . The scenario was run twice with the players swapping sides to see if they could alter history – the following is an account of the first engagement…… 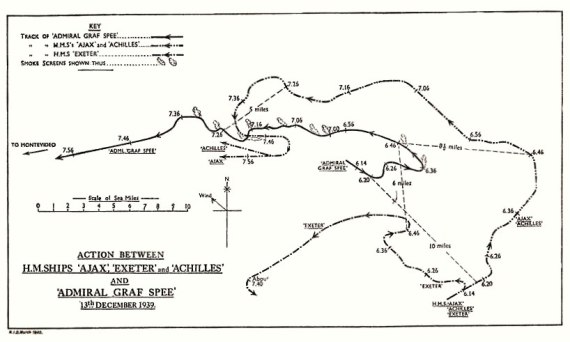 Have a look a the wikipedia page to read up on the events surrounding the Battle of the River Plate.

At a range of 13km Exeter manages to range in on Graf Spee but with little result – knocking out a torpedo tube and searchlights! Graf Spee misses with all batteries

Graf Spee continues on her course but with her slower top speed the British are gaining ground. The Graf Spee targets Achilles and knocks out both her front turrets and she is reduced to 1/2 speed. All British ships return fire but to no hits are scored.

Graf Spee continues to target the Achilles and this time destroys both Y & Z turrets. Having lost all her main armament Achilles is forced to retire; however not before her final salvo causes damage to the Graf Spee’s rudder!

Graf Spee’s rudder is jammed ahead and the damage caused by the Achilles is beyond repair at sea. Exeter again hits home and causes damage to the Graf Spee’s hull.

Graf Spee continues to steam away but her top speed is reduced to 20kts. With the Exeter and Ajax making 25 & 30kts the range is quickly reducing. The british begin to manoeuvre behind the Graf Spees to avoid her full broadside.

With the range reduced to 6km the Ajax and Exeter begin to hit their mark causing 3x hull hits and reducing the Graf Spee to little over 5kts. With only her rear battery able to fire the Graf Spee hits the Ajax slowing her a little and causing a fire which is soon put out by her damage control team.

The Graf Spee still has some bite left in her as the captain of the Ajax finds out after taking massive damage from the Graf Spee’s 11″ Guns. Ajax is seriously crippled and in danger of sinking after her aft magazine is hit. With some expert damage control she avoids an explosion ripping thru her. She turns to port and begins to retreat from the engagement. Exeter however remains undamaged and causes further damage to the Graf Spee – taking out hear rear turret and making her unable to defend herself from the rear.

At 7:00am with the Graf Spee dead in the water Hans Langsdorff  orders his crew to abandon ship. Shortly afterword the ship is scuttled.