On Tuesday we staged a refight of the “Battle of the River Plate” . The scenario was run twice with the players swapping sides to see if they could alter history…… 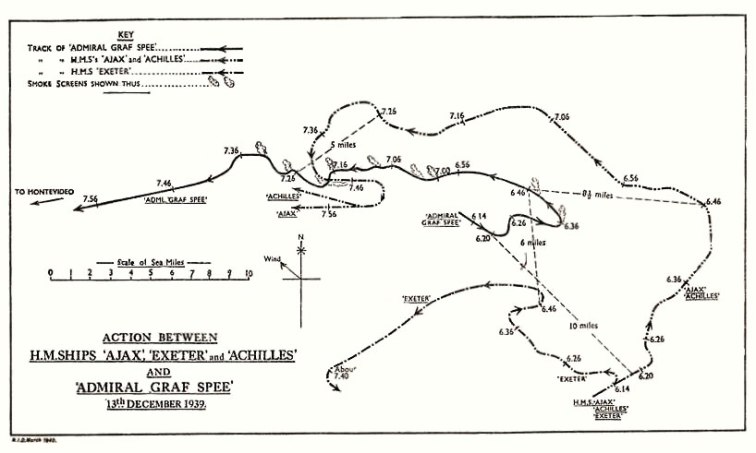 Have a look a the wikipedia page to read up on the events surrounding the Battle of the River Plate.

As per the historical engagement Graff Spee concentrated its initial fire against the Exeter seeing her as the greater threat. The 1st 2/3 salvos found the Exeter and put her main armament out of action and seriously damaged her hull effectively putting her out of the fight. The Graff Spee took hits in return from Exeter which, although starting a fire aboard, caused only superficial damage. Ajax & Achilles then closed their range on the Graf Spee using their superior speed to quickly close the gap. The Graf Spee realised it couldn’t outrun the 2x British cruisers so began circling to ensure she could bring the full weight of her broadsides against her pursuers.

unfortunately for the British the Kriegsmarine gunnery was lethally accurate and Ajax was sent to the bottom after receiving just one full broadside from the Graff Spee’s 11″ main battery. The fate of the Ajax did nothing to break the resolve of the Achilles who closed to less than 1km of the Graf Spee and launched her torpedoes. The spread missed the target but at such close range the 6″ guns of the Achilles eventually took their toll and succeeded in knocking out both main batteries of her adversary. However luck favoured the Germans who managed to hit and jam the Achillies’ rudder with their secondary armament as they attempted to flee to Montevideo to attempt repairs.

Result: Kriegsmarine – Major (tactical) Victory; however given the damage to the Graf Spees’ armament it would be very unlikely she would be able to defeat the remaining British surface units hunting her in the South Atlantic.

Again the main target for the Graff Spee was the Exeter this time however her gunnery lacked tha accuracy of the last game – only her secondary & tertiary batteries hit the mark but with no effect. The Exeter however managed to knock out the rear 11″ turret on the Graf Spee reducing her firepower by 2/3rds. The Graf Spee was not out of the game yet tho’ and an overconfident captain aboard the Exeter paid the price when she received heavy damage from all the Graff Spees’ remaining armament. This caused serious damage aboard the Exeter and she was forced to withdraw.

In the meantime the Achilles and Ajax had been gaining ground and by tailing the Graf Spee from behind managed to use her blind spot to close to effective range with their 6″ guns. After a quick turn to starboard to bring the broadsides of both ships against the Graf Spee the British ships hit home. The Graf Spee received over 15 hits in this initial salvo and sunk due to overwhelming critical damage to her hull.